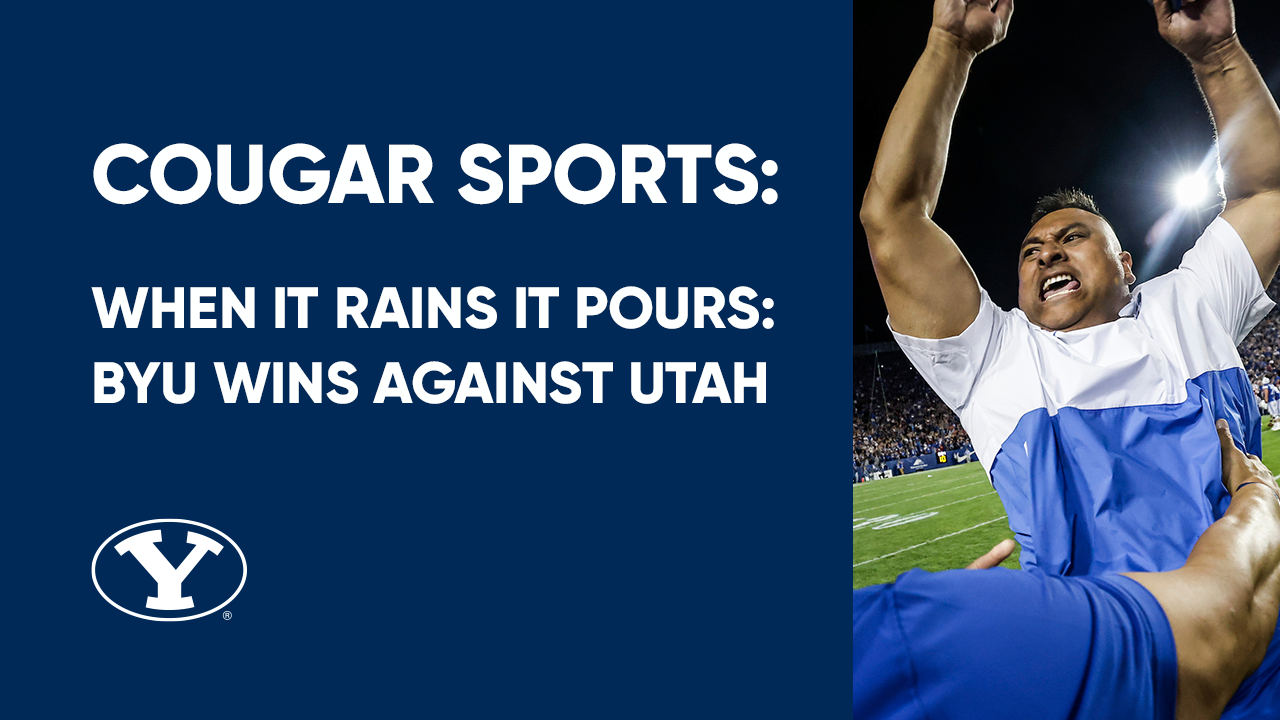 THE WAIT IS OVER: EPIC FOOTBALL WIN AGAINST THE UNIVERSITY OF UTAH

As the heavens opened and poured into LaVell Edwards Stadium on Saturday night, 9 years of bitter rivalry losses were washed away with a long-awaited win. This weekend BYU made it into the Big 12 conference and BYU football jumped into the ranks at number 23 after a streak-breaking win against the University of Utah. Want every behind-the-scenes detail, or a recap on the game from your favorite BYU sports analysts? Don’t miss BYU Football with Kalani Sitake on Tuesday, September 14th at 8:30 ET | 5:30 PT, to hear everything you missed! 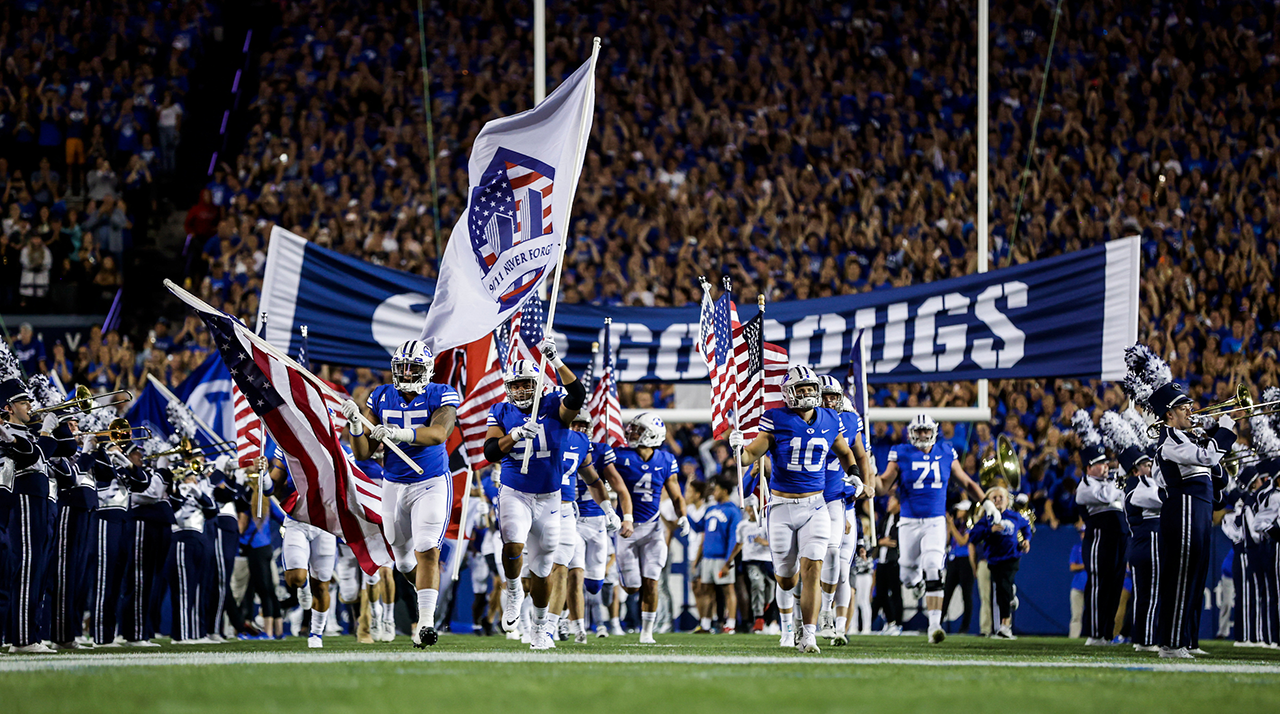 The stands were flooded with a sea of blue for hours before kickoff, and it only took a few minutes after BYU’s victory to flood the field with blue. With only a few specks of red scattered throughout LaVell Edwards Stadium, it’s safe to say that Utah was outnumbered by the tens of thousands. The energy was electric, and it kept the Cougs charged up through all four quarters.

BYU was up from the very beginning, after star kicker Jake Oldroyd performed a perfect field goal in the first quarter, solidifying BYU as a real competitor in the ‘Holy War’ rivalry this year. At the end of the first quarter, Utah had zero points on the scoreboard to BYU’s three.

In the second quarter, the Cougars gave Utah a run for their money, scoring two touchdowns and leaving the Utes in the dust. Wide receiver, Neil Pau’u, scored a birthday touchdown with a four-yard pass from quarterback Jaren Hall. Samson Nacua, in his debut game for BYU, scored a touchdown against his former teammates, solidifying his true-blue Coug status. 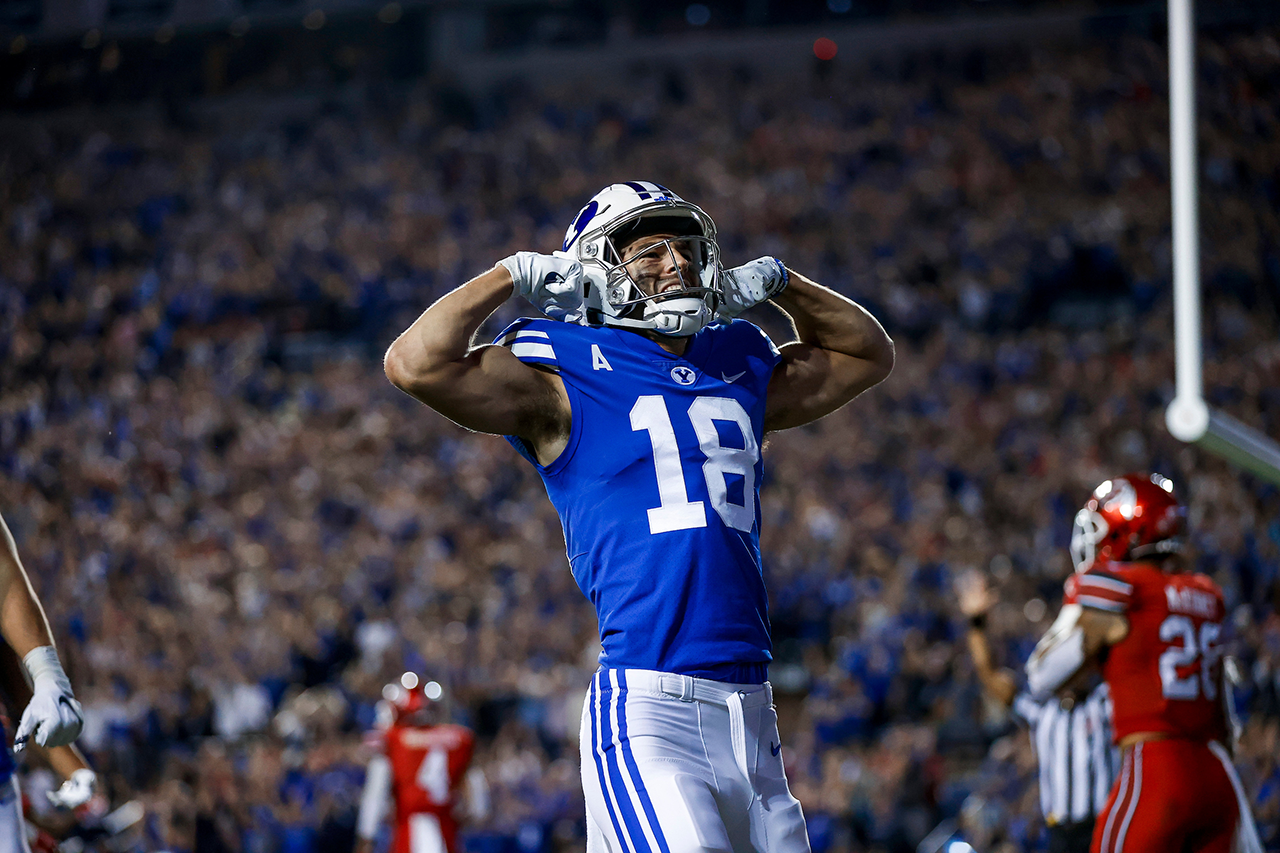 The third quarter saw BYU outscoring the Utes yet again, with a touchdown from star wide-receiver, Gunner Romney. Though rain started to pour down on LaVell Edwards Stadium, BYU’s momentum couldn’t be dampened. At the end of the third, BYU was up 23-7.

During the fourth quarter, Utah threatened a comeback with two touchdowns, which could have scared the Cougars, but not even that was enough to deter them. Jake Oldroyd strengthened the point gap with a field goal that brought the score up to 26-17. In the last play of the game, Jaren Hall knelt on the ground, and with shouts and cheers from the stands (and from BYU fans across the globe) the game was over. BYU broke the losing streak against Utah and Cougar Nation rushed the field.

As fireworks went off above the stadium, the victory screams from fans in the stands almost drowned them out. As a sea of blue encroached the field, head coach Kalani Sitake was raised above the sea of fans on the field and crowd-surfed down past the 20-yard line. It truly was a night to remember for Cougar Nation. Football analyst, Trevor Matich, joined BYU Sports Nation on Monday morning and said, “The nation loves BYU Football.” 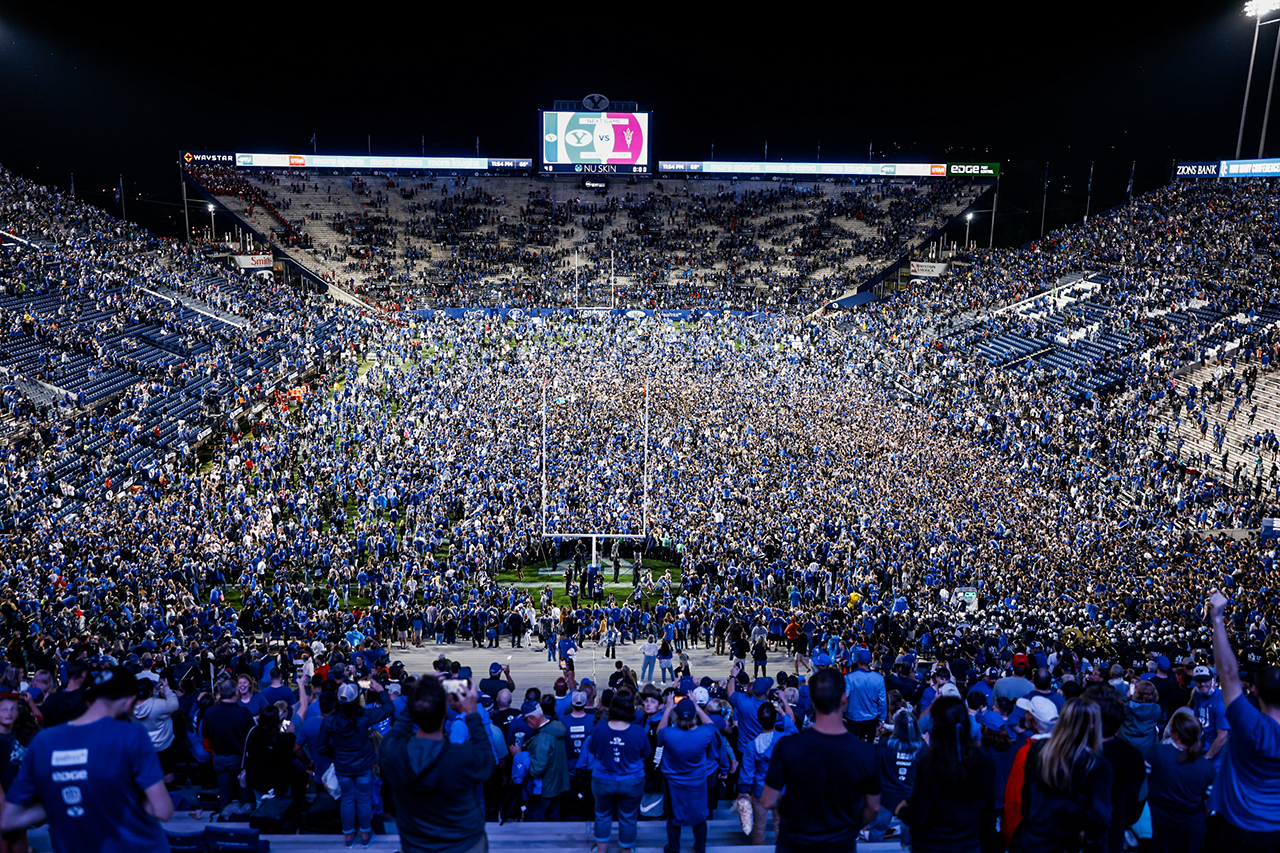 KEEP UP WITH BYU SPORTS

BYU Football will be prepping for a home game this weekend against Arizona State, as the Women’s Soccer team prepares to face Idaho State on Thursday. Find out more about our next football opponent this week on After Further Review and Countdown to Kickoff. Plus, stay tuned for details on how you can be in the live studio audience next week for BYU Football with Kalani Sitake.