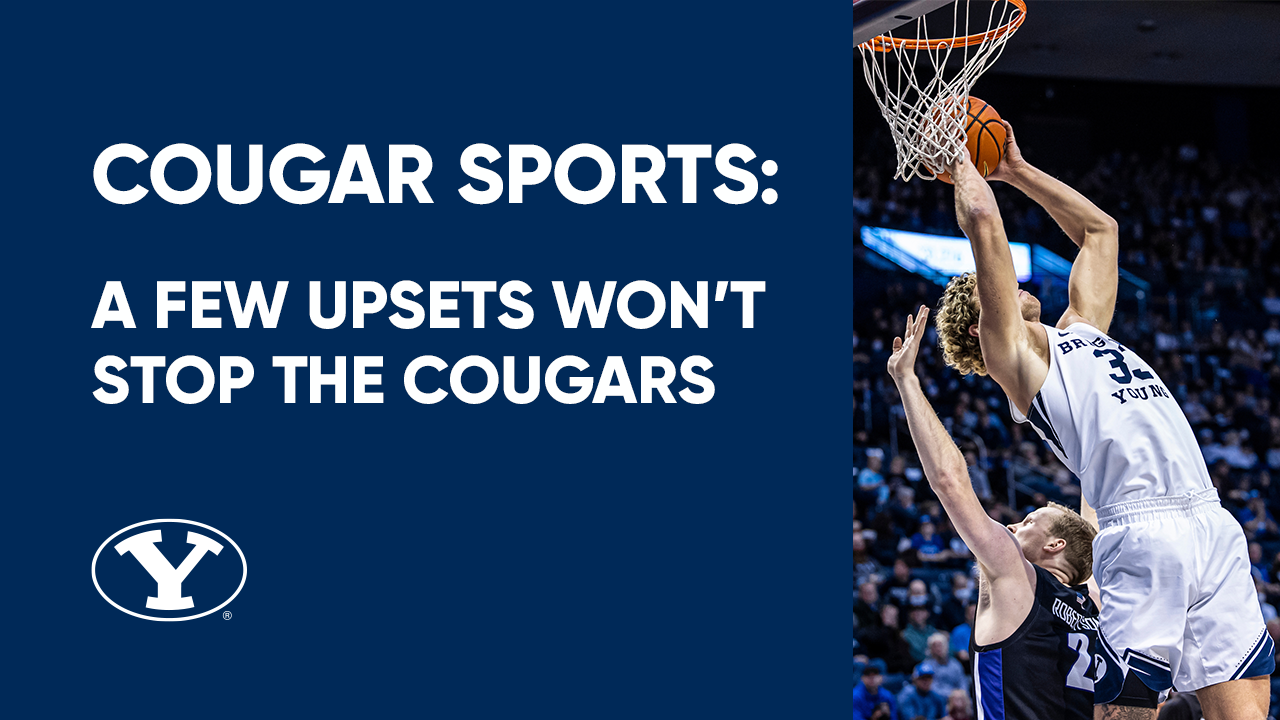 As January comes to a close, Cougar sports is far from being over! With some big wins across the board, and some small upsets on the basketball court this week, our favorite BYU teams brought their A game! Stay connected with all the latest and greatest updates on Cougar Sports, right here on BYUtv. Download the app and catch BYU Sports Nation daily at 10 AM MST!

It was a sad week for Men’s Basketball, with Thursday night’s game coming right down to the wire, and another nail-biter again over the weekend. In a week of away games, BYU opposed Santa Clara on Thursday, ending the game just one point short of a win at 76–77. BYU fell to a series of turnovers that turned the Cougs’ lead into a late loss. Despite shooting 49 percent in comparison to Santa Clara’s 46, the Cougars couldn’t do enough in the end to grab some last-second points. On the road, BYU traveled to the University of the Pacific, in hopes of a redemption game. But, in an unfortunate series of events, the Cougs took their second-straight WCC loss with a final score of 73–76. The Cougs return to the Marriott Center this week for their games against San Francisco and Gonzaga. In what is arguably the biggest home game of the year for Men’s Basketball, BYU will get their chance to redeem themselves against the Bulldogs. Will the Cougs get a chance to relive 2019 and knock Gonzaga off their podium? Stay tuned to find out! If you can’t get enough Cougar Hoops, make sure to check out BYU Basketball with Mark Pope every Tuesday at 6:30 PM MST. 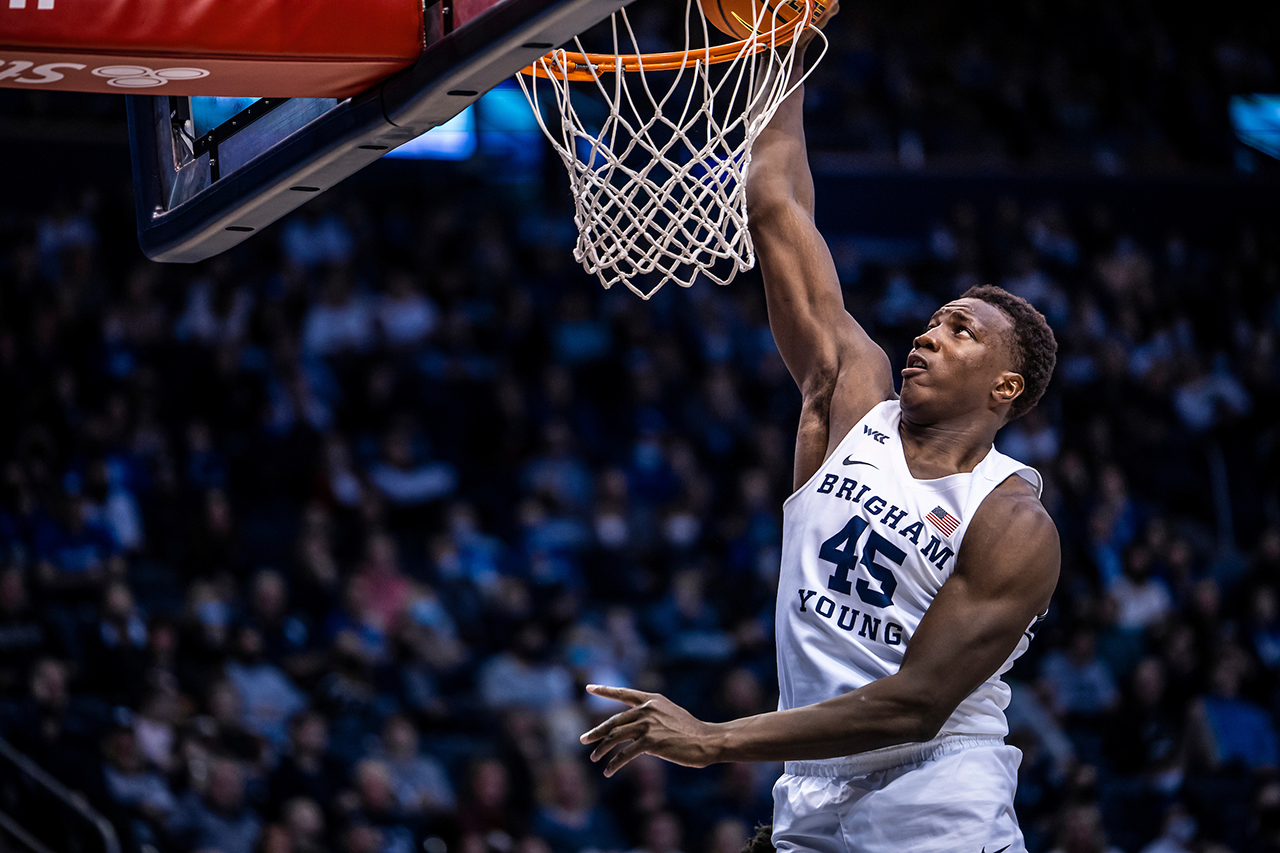 Women’s Hoops was on fire this week, taking two wins right here in the Marriott Center. Thursday saw the BYU Cougars playing against the Santa Clara Broncos, taking the win with a final score of 76–44. No.16 BYU brought their A-game for the west-coasters, forcing 23 turnovers. The Cougs shot for 57 percent from the field, and kept the momentum running into the weekend. Saturday night saw the Cougs taking an even bigger winning margin, with a final score of 99–58, just one point shy of a triple-digit win. Paisley Harding had her second 30-point game of the year, leading the Cougs in points for the game. The Cougars shot for 52 percent from the field, and 48 percent from the three-point line. Next on the schedule for Women’s Basketball is Portland and Gonzaga in two away games. It will be the first time this season the Cougs have played either team. Want to get excited with the rest of Cougar Nation? Make sure to watch BYU Sports Nation every morning this week for all your pre-game hype, stats, and more! 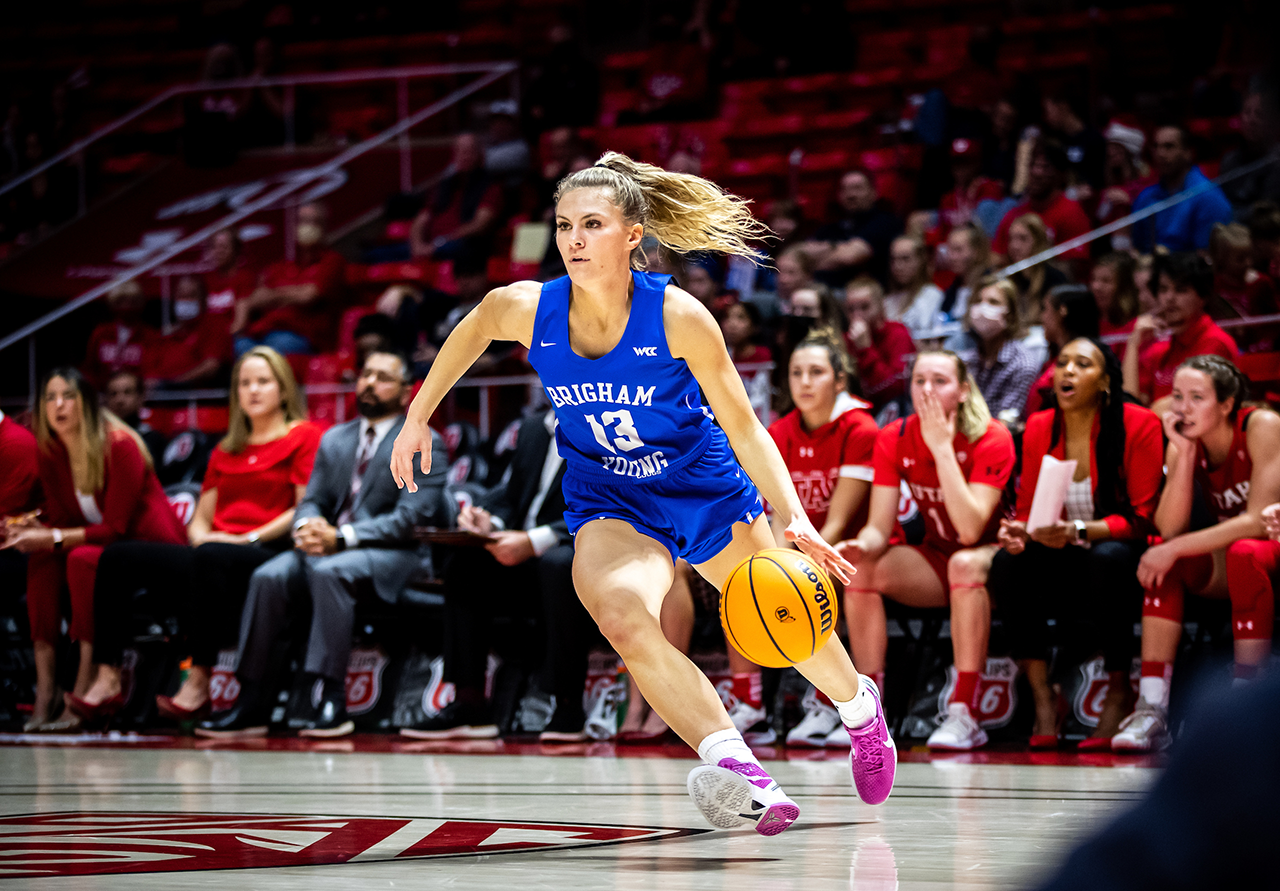 BYU brought the pressure against the University of Mount Olive last week, and pressed their way to a win. No.8 BYU saw a few early setbacks including an ankle injury for Davide Gardini, but quickly fought back to win their first game of the week at 3–2. The Cougs won the second, third, and fifth set to secure the win. Wrapping up the weekend in much the same fashion, BYU won their Saturday game against Mount Olive with a 3–1 final tally. Taking the first, second, and fourth set of the night, the Cougars secured their fourth win in a row for the season. This week the Cougs are set to face the Cardinals of Ball State University at the Smith Fieldhouse on Thursday and Saturday. Can’t be there in person? BYUtv’s got you! Tune in live, right here on BYUtv for each and every set, both nights! 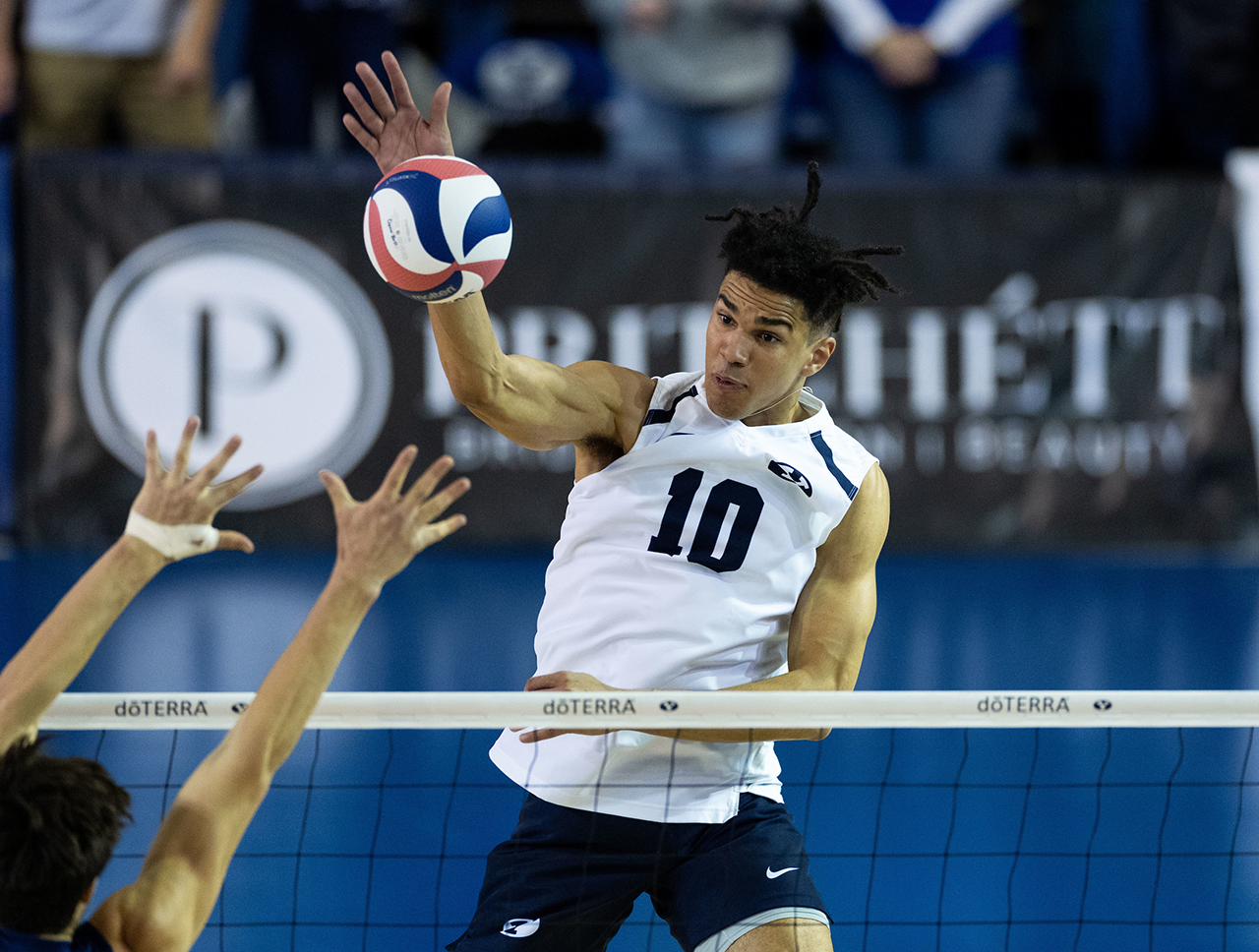 In their first home event of the year, BYU Women’s Gymnastics scored a 196.775 win against Utah State, their highest score of the season so far. Sadie Miner-Van Tassel took her highest all-around career score, with a 39.425. In another two highs for BYU, Elease Rollins took first place on beam, and Anyssa Alvarado took first on uneven bars. Utah State ended the night at 196.450, not too far behind the Cougs. Up next on the roster for BYU Gymnastics is Boise State, this Saturday at 12 pm MST at the Smith Fieldhouse. BYU is currently ranked No.21—can they jump the ranks this week? Stay tuned to find out! 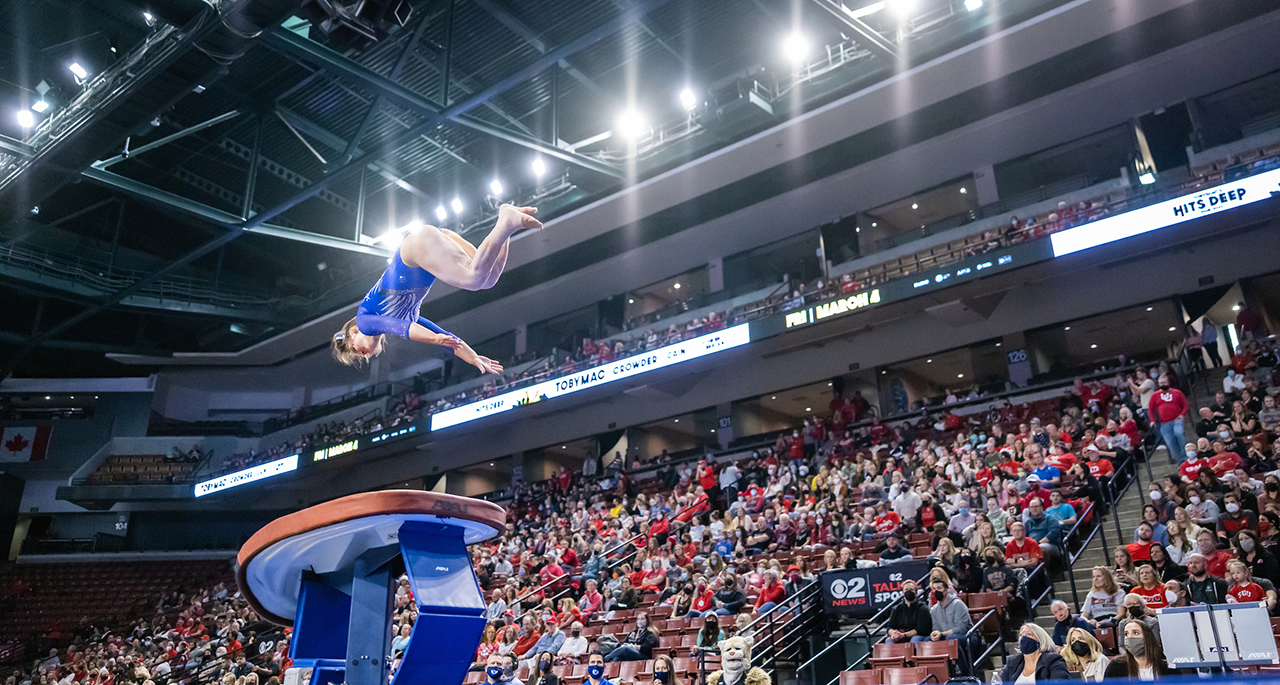