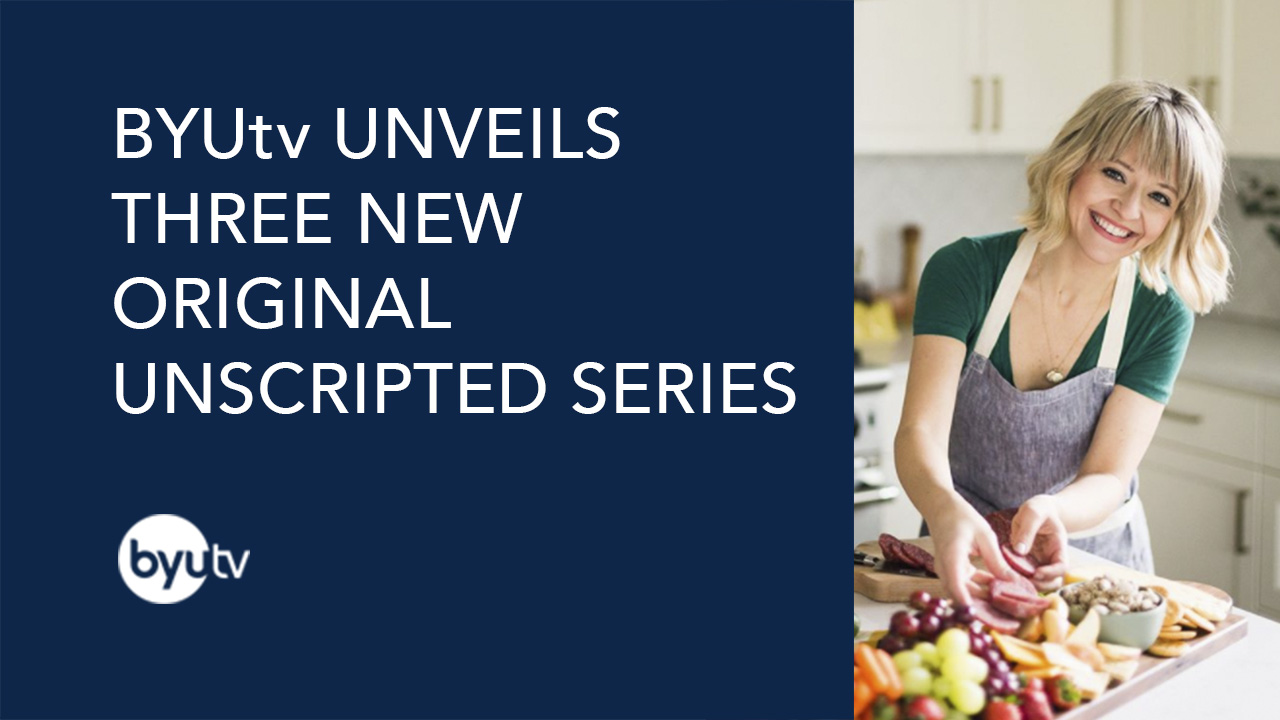 “We are thrilled to share these three new series that will bring families closer together through food, music and fun,” said Michael Dunn, managing director of BYUtv. “Filmed in our BYUtv studios in association with our phenomenal production partners, they are all great examples of the engaging, family-focused content BYUtv offers.”

“Dinner Takes All” is a family cooking competition show hosted by celebrity chef Kelsey Nixon (Food Network, Cooking Channel) in which two teams of five family members go head-to-head to cook their “best Sunday dinner.” Each team uses family recipes to create an entrée, three side dishes and a dessert while simultaneously playing interactive food-centric games for bonus points. Winning families receive a year’s worth of groceries or a cash prize.

“Food and family are at the heart of ‘Dinner Takes All,’” said Nixon. “It is universal subject matter that nearly everyone can relate to and enjoy together. It’s wildly entertaining, and aspects of the show will be perfect for bringing into your own home kitchen.”

The hilarious, interactive musical improv series “Show Offs” gives its cast, along with a special celebrity guest, the chance to “show off” by performing a spontaneous improvised play or musical, prompted by random ideas from the studio audience and accompanied by a live band. Hosted by comedian Casey Jost (“Late Night with Jimmy Fallon”), its cast features executive producers and co-creators Maclain Nelson (“The Saratov Approach”) and Jake Van Wagoner (“Impractical Jokers”), as well as Lisa Valentine Clark (“Random Acts”) and Hailey Smith (“Once I Was a Beehive”).

“Show Offs,” from Kaleidoscope Pictures (“Winter Thaw,” “Instrument of War”), Good Guys Productions (“The Saratov Approach,” “Once I Was a Beehive”) and BYUtv, wrapped production in August and will premiere in January 2019.

The comedic game show “Battle of the Ages” pits two multi-generational family teams against each other in mental and physical challenges. With the opportunity to pick a competitor from the opposing team and test their knowledge on a specific era, this game show will get families talking and laughing while they learn more about each other.

“Battle of the Ages,” from Bill’s Market & Television Productions (“Ellen’s Game of Games,” “Fear Factor”) and BYUtv, is currently in pre-production and will premiere in spring 2019.

These new shows join BYUtv's original programming slate, including the long-running sketch comedy series “Studio C,” which touts over 1 billion views on YouTube, "Relative Race," the first family-history based competitive reality show that follows four teams as they meet relatives linked by DNA for the first time in a race throughout the U.S. and "Random Acts," an unscripted hidden-camera reality show that highlights the altruistic nature of human beings by featuring real people who are the recipients of random acts of kindness. BYUtv is available in every state of the country via cable, satellite and multiple digital media platforms.

About BYUtv BYUtv provides families more than 1,700 hours of entertaining and compelling programming they can enjoy together. The network's content is trusted, contemporary and clean, yet clever and sophisticated enough to inspire children and parents alike. BYUtv's diverse portfolio of original, co-produced and acquired content includes scripted and unscripted dramas and comedies, 700+ hours of live HD collegiate sports, game shows, and holiday special made-for-tv movies, docudramas and concerts. BYUtv is available in 50 million homes in every state of the country on DISH Network, DirecTV and 146 other major cable systems. A digital pioneer, BYUtv was the first U.S. television network to stream all of its content live and unencrypted over the Internet. Today, BYUtv has over 1 million YouTube subscribers and 1 billion views and is available live and on-demand on multiple digital platforms free of charge, including Apple TV, YouTube, Roku, Amazon Fire, Chromecast, Xbox One, Windows Media, digital apps for iOS and Android and BYUtv.org. Based in Provo, Utah, BYUtv is part of BYU Broadcasting, which is owned by Brigham Young University.

About Kaleidoscope Pictures Kaleidoscope Pictures is a full-service production and creative entity. Founded in 2002 by Micah Merrill, Adam Anderegg and Russ Kendall to inspire positive change in people’s lives through the artistic expression of hope, Kaleidoscope has produced entertainment and media from short form branded content to Emmy® award-winning film and television programing. Recent work includes the holiday film, “Winter Thaw,” which the New York Times dubbed “best serious Christmas film of the year” and the award-winning music doc “Man in The Camo Jacket,” which Billboard Magazine called “an inspiring film.” Adam Anderegg and Russ Kendall are co-creators and executive producers of “Show Offs.”

About Good Guys Productions Maclain Nelson and Jake Van Wagoner are best friends and founders of Good Guys Productions. They met in an improv comedy group in 2004 and have been creating entertainment together ever since. Their past films include the highly successful "The Saratov Approach" and "Once I Was a Beehive." More recently, they created the holiday comedy "My Brother, the Time Traveler," in which they both starred alongside James Murray (“Impractical Jokers”). They are co-creators, executive producers and in the main cast of "Show Offs" – the first long-form, improv comedy show on television.

About Bill’s Market & Television Productions Bill’s Market & Television Productions is a leading non-scripted television production company based in Los Angeles. Led by veteran reality producer David A. Hurwitz, Bill’s Market & Television Productions is at the forefront of groundbreaking, high-stakes, entertaining television programming. Known for their ability to bring audiences to the edge of their seats through use of explosive scenes, cutting-edge interactive technology and compelling stories, BMTVP continues to develop and produce non-scripted content in the broadcast, cable and digital worlds. The latest additions to the company’s growing portfolio include “Black Card Revoked” (BET) and “Ellen's Game Of Games” (NBC). Hurwitz’s previous credits include exciting productions such as “Best Time Ever with Neil Patrick Harris” (NBC), “Fear Factor” (NBC), “American Gladiators” (NBC), the Emmy-nominated BrainSurge (Nickelodeon) and many others.